I Would Rather Be His Dove…

Like Enos of old I would like to tell you of a sacred wrestle I had before God when camping with the good young men of my ward.

As you well know I read the Scriptures, the Book of Mormon, every day, a chapter every morning, before I get out of bed.  I have done so for many years, and it has helped set the pattern and tone for my day.  I am grateful that I was taught by good priesthood leaders to read the Book of Mormon daily.

Had it not been for COVID-19 restrictions I would be doing my reading this week at our annual Aaronic Priesthood Encampment with about twenty deacons, teachers and priests, and other dedicated leaders and fathers.  We would have kayaked mighty rivers, wrestled fish on the line, hiked over hills, climbed and swung on ropes, completed team building challenges and games, eaten good food we made for ourselves, swatted at mosquitoes, enjoyed some of the best ice cream, performed vicarious baptisms in the Sacramento Temple, and prayed and studied the gospel together by the campfire under God’s heaven of stars.  I so miss not being able to do that for our boys this year, not to mention similar activities we would have done with our girls.

Back in June of 2018, during the five days of our Challenge Young Men Camp, I had been reading in the Book of Alma, chapters 21-25.  When the young men and I camp together, every night at the campfire I conclude our devotional by speaking to them for a few minutes upon whatever the Lord inspires me to speak.

It was interesting that as I read each successive chapter throughout the week certain stories and verses would stand out to me and cause me to ponder throughout the day.  When night fell and we would be sitting at the campfire I knew of what the Lord would have me speak to my young men.

These chapters in Alma comprise a period in which the sons of Mosiah are participating in the miraculous conversion of the Lamanites, and their path to becoming free of their stain, as they put it, or the sins that had plagued them through life.

On the day I read in chapter 23 of the Lamanites laying down their weapons of rebellion and following the Lord, never abandoning their faith, of course I spoke of that at the campfire.  I was so moved and eager to talk to my boys about a people that “never did fall away,” (23:6) and who laid “down the weapons of their rebellion, that they did not fight against God any more” (23:7).  I had always related the laying down of the weapons of their rebellion to the Lamanites burying their actual weapons of war, but this was not about that (chapter 24 is where the people determine to and bury their actual weapons).  I spoke to the boys about how these weapons of rebellion referred to in chapter 23 were the things that were keeping them from truly following the Lord. 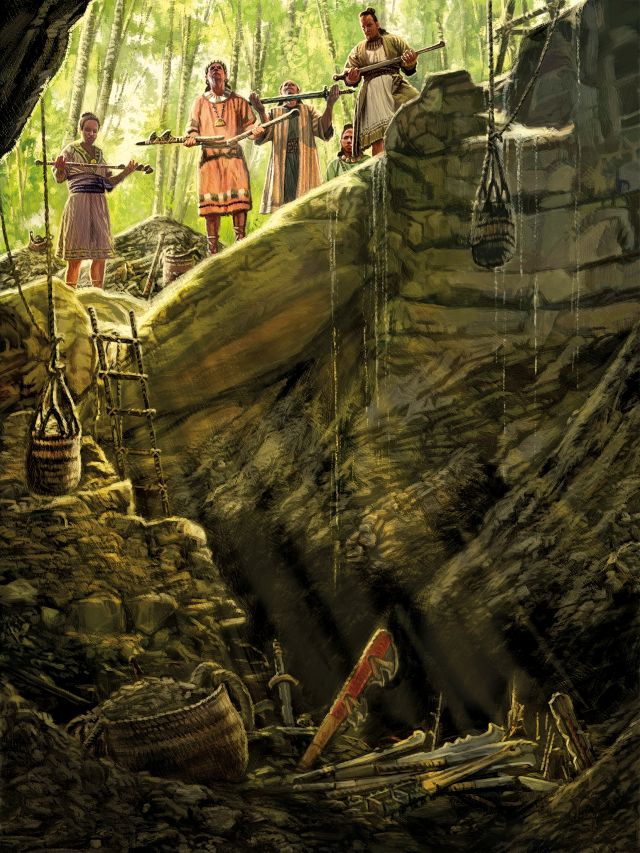 Illustration of the Anti-Nephi-Lehies burying their weapons, by Dan Burr

The Lamanites were not all murderers and their swords were not all stained with blood.  Some of these were women and children and did not even own swords, yet they laid down their weapons of rebellion still, and the Lord took away their stain.  They were taught by the Sons of Mosiah with authority and by the Spirit of God and by the Spirit of revelation, therefore a mighty miracle was worked in their hearts and they were converted never to fall away, because they laid down their weapons of rebellion.

I talked to the boys about what their own weapons of rebellion might be and how it was so important for us all to discover those things and to lay them down before the Savior, at His feet, and never pick them up again that we may be true followers of Christ, and never fall away.  It was a very moving experience and lifted my heart to soar, a night I shall never forget.

The next morning I awoke very early in the privacy of my RV.  I did what I always do and I read the next chapter of the Book of Mormon.  As a routine at home I read the chapter each morning by myself, sometimes reading it aloud to my sweet wife in bed, and then that evening we all read it together as a family.  Well, on this day I was reading about the Lamanites actually burying their weapons of war and following the words of their king to never lift them up again, even in their own defense against their people or any other people.  Then when their enemies fell upon them they laid down prostrate in front of them calling upon the Lord, and did nothing to harm their brothers who were falling upon them.

When I finished reading I said my prayers, then took my shower, all the while pondering what occurred in the lives of these good people, even unto death.  While I was dressing I felt so moved upon by the Spirit that I had to lay down upon my bed again flat on my back pondering what I had read.

The Spirit of God overwhelmed me and I became so full that I cried out to my Heavenly Father in thankful prayer.  Tears flowed as miracles worked in me and I thanked God and then pleaded with Him to grant me spiritual strength and guidance in all that I do.  I became so moved and knew that it was the will of the Lord that I serve Him all the days of my life and dedicate myself unto His service.

Now you need to know something of me that perhaps you did not know.  When I was younger I always felt more the soldier than the saint.  I wanted to die wielding my sword in the defense of my God, my country and my family.  There was great nobility in this kind of conclusion for me.  I would have happily died as a young man if I was fulfilling some type of destiny like this.  It takes courage to raise a sword in the defense of God’s word or one’s family or country.  I have always had that courage.

This fine morning when I lifted my voice to Heaven I pleaded with my God, my Father, covenanting with Him that if I was called upon to do so I would be the soldier for Him that He needed in this great cause, but this day, reading the example of these good men that laid down their lives for peace, I cried out to God and pleaded that if it were possible, rather than be His sword, I would ask that I might be His dove, that I might stand to declare His word as a dove of peace bringing the gospel message to all who would hear in ministering unto all of His children.  I would have the greater courage to stand and declare peace.

I said, “I will be Thy soldier, I will be Thy sword, if this is required of me, but I would so much more like to be Thy dove and carry Thy message of peace.”

I do not ever recall before praying in such a way, shedding so many tears and feeling so much force within my heart, but these are the words I prayed and these are the things I felt.

Immediately after composing myself and rising again I felt the impulse to shave.  I thought to myself, “I don’t shave during camp, I need to save my shave till tomorrow (Friday) for the temple and for Monica when I get home, besides, I have already showered.”  The Spirit then responded, “If you want to be My dove, you will look like My dove.  Just shave again tomorrow.  This you shall do.”  So I did.  I found that day that I walked with greater peace in the Lord.  Oh, there were challenges but I found myself to be more connected to God‘s Spirit in being His dove.

Since that experience at camp I have found the Lord closer to me and been able to hear the still small voice of the Holy Ghost teaching me and guiding me through this process of becoming what God wants me to become.  I am so grateful for this profound experience of my life.  I will allow this to change me and I will become what I need to be.  It will take many years, perhaps even a lifetime or beyond, but I am determined to become His.   He has taken my stain from me.  I owe Him all of that and so much more.  I believe and will always follow and praise my Savior and Redeemer.  Let us join together in our quest for peace in Christ.  In the name of Jesus Christ, amen.